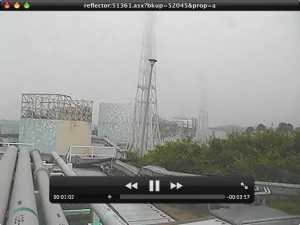 In a recent post on his Forbes blog, Edison 2.0, Osha Gray Davidson connects readers to a live webcam installed by TEPCO at the Fukushima Dai Ichi nuclear plant. That webcam has since been replaced by two cameras, one looking at the site from the Unit 1 side and the other from the Unit 4 side [Ed. Note: added the links 16-Jul-17]. The ongoing crisis at the plant has made a fascinating, slow-motion horror story for the world to watch. The addition of the live web cam, along with news reports dealing with the continuing attempts to bring the four stricken reactors under control, make a great study in emergency planning and crisis control.

New information being released by TEPCO shows that the reactor cores melted down earlier than originally believed, and in at least one case, the concern is now focused on the penetration of the external shield building by the molten core. If the core has actually “left the building” as some experts believe, the potential for environmental contamination on an enormous scale exists.

In the mean time, TEPCO workers and contractors continue to try to clean up the site, removing piles of debris left from the explosions back in March. IEEE Spectrum reports that a teleoperated (remote-controlled) excavator accidentally blew up an oxygen cylinder that was hidden in a pile of debris. TEPCO claims that no damage was done and that the machine is still in operation.

The result of this nuclear accident is a global turn-around in what was a resurgence in interest in nuclear power. Reports indicate that Germany will be taking all their nuclear power plants offline and decommissioned by 2023. An unconfirmed report says that Japan is planning to decommission all 54 nuclear plants on the islands in the near future. A report on the Ahram Online blog indicates that the Swiss are also responding to public pressure to decommission that country’s reactors, with the first going offline in 2019 and the last by 2054. As usual, the pragmatic Swiss approach is to allow the reactors to live out their design lifetimes and decommission rather than refurbish them at that time.

The Japanese nuclear industry, once considered a model of safety by the international nuclear community, has had its dirty laundry exposed. In March, just six days after the earthquakes and tsunamis, Yuri Kageyama wrote an exposé of the industry’s scandals on MSNBC’s World Business blog. His article cited a culture of secrecy in the industry that prevents improvements and encourages cover-ups and corner-cutting.

The opportunities that Fukushima is giving us are manifold. First, the nuclear industry gets an opportunity to learn from the catastrophe at the plant, and to see some of the ways that the original boiling water reactors can fail. This may result in design improvements to similar plants that remain operational in other countries, helping to reduce the likelihood of this kind of disaster re-occurring in the future. Second, it allows emergency response specialists to learn from the successes and failures that occurred at the plant, improving the emergency response plans at other nuclear and non-nuclear facilities where a disaster could have broad environmental and economic impacts. Third, it has given governments, regulators and the International bodies a wake-up call about the nuclear industry. This is a technology that can be safe and efficient if managed properly, but when corners are cut and problems are covered up, the caged nuclear dragons can escape and wreak havoc.

Our world is entering an amazing, scary, exhilarating, time of change. Nuclear power, once seen as the Golden Fleece that would light the world for hundreds of years, has shown its dark side again. Alternate forms of energy generation are starting to come online, with wind farms and solar farms springing up around the world. Even these more benign forms of generation have their downsides, and there isn’t enough installed base to support our energy needs – yet.

So, while we watch the grainy video streaming from Fukushima, we need to consider our way forward and learn the lessons paid for by the people of Japan.