Twenty-six miners lost their lives when a methane and coal dust explosion destroyed the mine. Eleven miners remain entombed. The disaster at the mine continues to impact the lives of the miners’ families and lives in Plymouth, Nova Scotia.

The Westray Mine disaster and the inability of the authorities to hold the mine owners and management accountable for the poor safety culture led Canada to criminalize negligence when it affects the health and safety of workers.

If you have not heard about the Westray Mine Disaster and prefer to listen to a podcast or watch a video, there are a couple of good options for you.

Canadaland’s investigative journalist Arshy Mann digs deep into the disaster in MINING #4 — The Westray Disaster [7], including interviews with miners who worked at the Westray Mine and participated in the rescue and recovery efforts. Featured in this episode: Vernon Theriault and Tom Sandborn.

If you prefer documentary videos, watch CBC’s The Last Shift [8].

The Westray Mine Disaster eventually resulted in Bill C-45 being brought forward in the Canadian Parliament in 2004. This bill criminalized negligence related to OHS in all Canadian jurisdictions. The bill eliminated legal limits on fines associated with OHS violations and simplified prosecutors’ jobs by allowing them to charge everyone who had control over the workplace where the injury or fatality occurred by eliminating the need to determine a “controlling mind” within the business. In most cases, before this bill passed, the difficulties related to finding a single “controlling mind” in a business meant that successfully prosecuting anyone was nearly impossible. That’s why the original Westray prosecution eventually failed.

To better understand the need for the legislation, we must understand what happened at the mine.

The Westray Mine was owned and operated by Curragh Resources Incorporated (Curragh Inc.), which obtained provincial and federal government money to open the mine and supply the local electric power utility with coal.

The mine opened on September 11, 1991, closing only eight months later after the underground methane explosion. National media widely followed the week-long attempts to rescue the miners until it was apparent there would be no survivors.

An investigation by the Nova Scotia Department of Labour followed the recovery operations. In November 1998, the mine was dismantled and permanently sealed.

Curragh Inc. planned to extract coal from the infamous Foord coal seam. The Foord coal seam is notoriously unstable and laden with methane gas. The Allen Mine closed in the 1950s and was the last mine to work the seam. That mine had experienced eight methane gas explosions before closing.

In developing the mine, Curragh Inc. had scrapped the original plans early on, changing tunnel directions so miners could tap into the coal seam sooner. Nova Scotia’s Department of Natural Resources was worried that the route would cross major geological faults. At one point, it threatened to pull Westray’s mining permit but backed off for never explained reasons [2].

The Nova Scotia Department of Labour expressed concerns about the training and certification of workers and the lack of an emergency plan. Despite this, the labour ministry gave the operators, Curragh Inc., a special permit to use the proposed methods to tunnel until they reached the coal seam, but not mine coal, as the proposed methods were not considered safe for coal mining.

Even before the mine opened on September 11, 1991, many people raised concerns about the mining methods used. Two months before the opening, MLA Bernie Boudreau wrote to the Nova Scotia labour minister Leroy Legere asking why the mine was using potentially dangerous mining methods not approved for coal mining [3].

In its first two months of operation, the mine experienced four roof falls. Department of Labour inspectors repeatedly asked the company for roof support plans. The Department also raised concerns about the mine’s failure to clean up the highly flammable coal dust that lined the floors and walls and its lack of stone-dusting, a process to neutralize the material’s explosive nature [2].

Weeks before the disaster, a provincial inspector issued an order to have the coal dust cleaned and stone-dusted but did not enforce the order during a return visit just days before the explosion.

The Westray Mine Disaster memorial in Their Light Shall Always Shine Memorial Park in Stellarton, Nova Scotia, was built to provide a place where the public can remember the miners. The memorial park is located above the section of the mine where the miners died.

The miners killed in the disaster included:

May they always be remembered.

How the miners died

Workplace fatalities are usually horrible. Autopsies of victims provide investigators with important clues that help to understand exactly what happened.

According to the autopsies and external medical examinations completed after rescuers recovered the victims, 15 miners died within one minute of the explosion’s ignition [4]. Most of the bodies had very high concentrations of carbon monoxide; this would cause death in 20 seconds to one minute [5]. At least three bodies showed injuries consistent with blunt force trauma, causing several injuries which would have been fatal. Signs of burning, ranging from superficial charring to fourth-degree burns, were seen on all bodies. 13 victims were identified visually.

One body was located but could not be removed from the mine. The body was crushed and trapped within machinery compacted by the explosion. The remaining ten miners, whose bodies were never located, were believed to have been killed instantly. Their working areas suffered the most comprehensive destruction in the mine, with many large rockfalls. From the available information, It is unlikely that any of these miners survived the explosion.

In addition to the miners killed in the disaster, 117 became unemployed immediately after the explosion. After six more years, the Provincial government intervened to give the laid-off miners 12 weeks’ severance pay.

The same day the recovery operation ended, the Nova Scotia government ordered a public inquiry to investigate what caused one of Canada’s deadliest mining disasters. Justice K. Peter Richard would lead the inquiry. Publication of the inquiry’s findings came in late 1997. The findings showed mismanagement of the mine, miners’ safety was ignored, and poor oversight by government regulators led to the disaster.

A criminal case against two mine managers went to trial in the mid-1990s but ultimately was dropped by the Crown in 1998, as it seemed unlikely that the Crown could attain a conviction. Curragh Resources went bankrupt in 1993, partially due to the disaster.

The Department of Labour filed 52 charges under the Occupational Health and Safety Act against Curragh Resources and four local mine managers five months after the explosion. At the same time, the RCMP was conducting a criminal investigation. In December, the province announced it was dropping its charges over fears those trials could interfere with potential criminal charges.

Nearly a year after the disaster, the RCMP called a press conference at the fire hall in Plymouth. The families had gathered in the same fire hall in the days following the disaster. The RCMP announced charges of manslaughter and criminal negligence causing death against Curragh Resources Inc. and former mine managers Gerald Phillips and Roger Parry. The more than 100 people in attendance – many families of the 26 miners killed – responded with a standing ovation.

The families’ euphoria was short-lived. The trial began in February 1995, but the charges were stayed when the judge ruled the prosecution had failed to disclose key evidence to the defence. Curragh Inc. appealed that ruling twice, and two years later, the Supreme Court of Canada ordered a new trial. But on 1997-06-30, Crown Attorneys returned to the fire hall in Plymouth to tell the miners’ families that the case was over; they were dropping all charges. After reviewing the evidence, prosecutors believed there was no reasonable chance of a conviction.

In 2002, following lobbying efforts by unions and the Westray Families Group, the federal government introduced Bill C-45. The “Westray Bill” established a legal duty for all persons who “direct the work of others” to take reasonable steps to ensure the safety of workers and the public. It introduced new sections in the Criminal Code of Canada, including criminal charges for corporations and their representatives who fail to ensure workers’ safety.

Since becoming law in 2004, the Crown has laid fewer than a dozen charges under the legislation, and no one has been handed a jail sentence. Employers paid a fine after reaching a plea bargain in the three convictions. In 2014, the United Steelworkers union, with support from the Westray Families Group, launched a nationwide campaign urging the federal government to give police and prosecutors the training, tools and direction to enforce the provisions of Bill C-45. 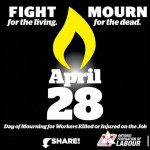 Why YOU need a Product Safety Certification Strategy that Works!

Emergency Off (EMO) vs Emergency Stop

The History behind April 28th, Canada’s National Day of Mourning

Home » The Westray Mine Disaster